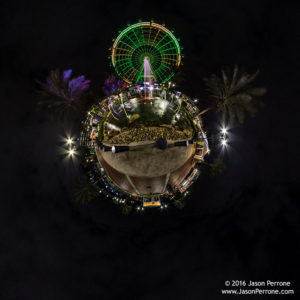 On the evening of January 7th, I went to Orlando, Florida to do some night photography and to test my new Samsung Gear 360 camera. I figured a good place to test the Samsung camera’s 360-degree time-lapse mode would be the Coca-Cola Orlando Eye 360 Ferris wheel on I-Drive.

Using the Samsung Gear 360 camera I shot two 360 degree time-lapse videos and a 360 degrees VR video in 4k. I uploaded the three videos to my YouTube channel, while on the channel please subscribe! You can also view the 360 VR videos in the interactive virtual tour below. Just hit the play button and look around!

When I arrived at the Coca-Cola Orlando Eye, I knew that I would not be able to capture the images I had in mind since there was a small concert going on. So still trying to make the best of the situation, I went by the fountain closer to I-drive where there were fewer people. Being slightly further from the giant Ferris wheel actually helped a bit.

I would like to go back and do more photos of the Orlando Eye when they are not hosting an event. It would also make for some really good shots from the top of the Ferris Wheel day or night. I think a good day-to-night time-lapse of the area would be great as well as a time-lapse video inside one of the carts on the wheel. So if anyone is down for a photography adventure let me know by leaving a comment below!

While shooting the time-lapse, I captured a few 360-degree images with my Canon 6d and Sigma 8mm mounted to my Manfrotto tripod using the 360precision Atome head. View the interactive panoramic below. Click the play button to view the 360 photos and 360 VR video.

The 360-degree interactive photos and VR video are best experienced in full screen.