In late June, I went down to the Florida Keys for a 4-day vacation. While down in the Florida Keys, I had the opportunity to fly my DJI Phantom 4 Advanced drone in a few locations. Below you can see some of the aerial 360-degree panoramic images I captured with my drone while bearing the Florida heat. 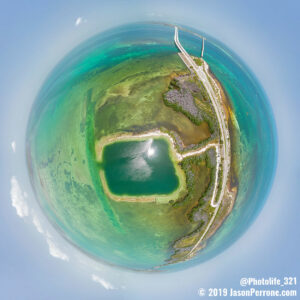 One of the first locations I was able to fly the DJI Phantom 4 advanced was at Horseshoe Beach on Big Pine Key. Horseshoe Beach is located on the northern side of U.S. Highway 1 at mile marker 35 just as you come past the old Bahia Honda bridge. The horseshoe was formed by excavating when the stone was needed for building the bridge. Since the beach is shaped like a horseshoe, the waters are kind of protected and makes for an amazing place to snorkel, scuba dive or just swim in the water. After flying the drone for about 15 mins, I decided to jump into the water as the heat was almost unbearable. As you can see from the aerial images in the interactive tour below, the quarried area is much darker than the surrounding waters and was way too deep for me to free dive. While in the water, I was able to see many kinds of fish, a few jellyfish, and other sea life. The Horseshoe is only about 30 feet deep which is great for beginner scuba divers, free divers and snorkelers alike.

For this flight, I used my new Neewer filters for the DJI Phantom 4 Advanced drone. The camera settings were: 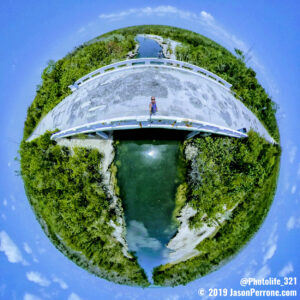 On another day, we went to a place called “Jumping Bridge”. We had to walk a good distance from where we parked on the side of the road at this location, so I only took the drone and Insta360 One X cameras with me and I am glad I did. This location is mainly a locals swimming hole but a few outsiders know about it. The bridge is located on lower Sugarloaf Key along Old State Road 4a and is about a 6-7 min walk from the entrance or barricade that is up. Besides jumping from the bridge, you can snorkel here, take hikes, ride bikes or just enjoy the sun and fresh air while you work on your tan lines. The only negative side is that some people suck and leave their trash. Bring your water shoes as there was broken glass along the road, bridge, and shoreline.

For this flight, I used my new Neewer filters for the DJI Phantom 4 Advanced drone. The camera settings were: 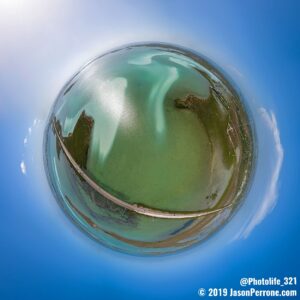 An aerial 360-degree little planet image above park key in the Florida keys.

The third location I flew from was a pull off spot on the side of road at the East end of Park Key at the Park Channel, between Upper and Lower Sugarloaf Keys around mile marker 19. I decided to stop here as the water was super clear and you can see all the different colors in the water. Some of the keys you can see in the images include Buttonwood Key, Upper Sugarloaf Key, Lower Sugarloaf Key, Dreguez Key, and even Cudjoe Key. Park Key is about 70 acres and was made from fill, so it’s technically an island, not a key. It was made from fill, so the railroad and roadbed could be put down. Park Key is uninhabited and only serves as a causeway for travelers.

For this flight, I decided not to use any filters on the drone and you can see it in the settings as I needed a normal shutter speed for daylight which was 1/640th of a second. When using a filter, you reduce the amount of light entering the lens, therefore need a slower shutter speed like the images above.

Below is a bonus 360-degree panoramic. I decided to wake up early one morning and flew the drone at sunrise. The result was worth waking up early on a few hours sleep.