On the way back from a trip to the Florida panhandle in May, I took many back roads, and while on highway 19 in Levy County, I came across the Patterson-McInnis Train along the side of the road. Below are several 360-degree panoramic images I captured at the roadside attraction and historical marker.

A sign at the park reads, “This locomotive, known locally as “Three Spot”, often pulled 30 to 40 cars as it transported logs from area woodlands to the Patterson-McInnis Sawmill. Originally a wood-burning engine thought to be built around 1915, it was converted to steam during its service, which ended about World War II. The locomotive was donated to Levy County by the Paterson-McInnis Lumber Company in 1969 and maintained by the Florida Department of Transportation in the Gulf Hammock Wayside Park.”

The historical marker reads, ” In June 1926, the Grove-Dowling Hardwood Company was formed. The lumber company was a partnership of E.W. Grove, Sr., and brothers William H. and James H. Dowling. the Dowling Brothers moved their lumber business from Odessa, Pasco County to Gulf Hammock, Levy County. With Grove’s capital, they purchased 250,000 acres of land in Levy County abundant with cypress, hardwood, and virgin pine. The Grove-Dowling company which employed more than four hundred men, expanded Gulf Hammock in the area west of this marker. To house the workers and their families, the company built more than 150 homes and cottages. All the houses and buildings were equipped with lights, running water, and a state-approved sewage system. The company town also boasted a complete lighting system, power plant, department store, and modern hospital. New lumber mills with large machinery were built and included a modern machine shop to repair locomotives. The main sawmill cut 100,000 feet of lumber each day. There also was a planing mill, twelve dry kilns, and a cooling shed that would hold one million feet of rough lumber. The crate mill turned out 8,000 baskets or hampers per day, making it among the largest crate factories in the South”

The other side of the marker reads, “PAT-MAC LOCOMOTIVE, The Grove-Dowling company used five locomotives, four large locomotive cranes, two log loaders, and one skidder machine for logging. One locomotive, No. 2411, was a 2-8-0 steam engine built in November 1915 by the Vulcan Iron Works of Wilkes Barre, Pennsylvania. The locomotive was originally purchased by the Gulf Pine Lumber Company of Pasco County and labeled No. 3. The engine was sold to Grove-Dowling prior to 1927 and moved to Gulf Hammock. As the Great Depression set in across the nation, the Grove-Dowling Hardwood Company went into receivership on March 3, 1930, and their holdings were acquired by the Robinson Land & Lumber Company of Alabama. The Robinson company was owned by A.M. McInnis, W.H. Paterson, and J.J. McIntosh. In 1937, the company was renamed the Paterson-McInnis Lumber Company (Pat-Mac). In 1956, the sawmill was destroyed by fire. On October 18th, 1969, Georgia-Pacific deeded land to the Levy County Board of County Commissioners, which established a wayside park. Pat-Mac donated the Vulcan locomotive No. 2411 to the Florida Department of Transportation for display. By Resolution, dated February 4, 1992, ownership of the locomotive passed to the Levy County Board of County Commissioners.

Learn more about this location on the Historical Marker Database website. Other locations you might find interesting are the Eagle Rock Mound in Georgia, Old Spanish Trail Zero Marker in St. Augustine, or Sunburst Falls in Canton, North Carolina. 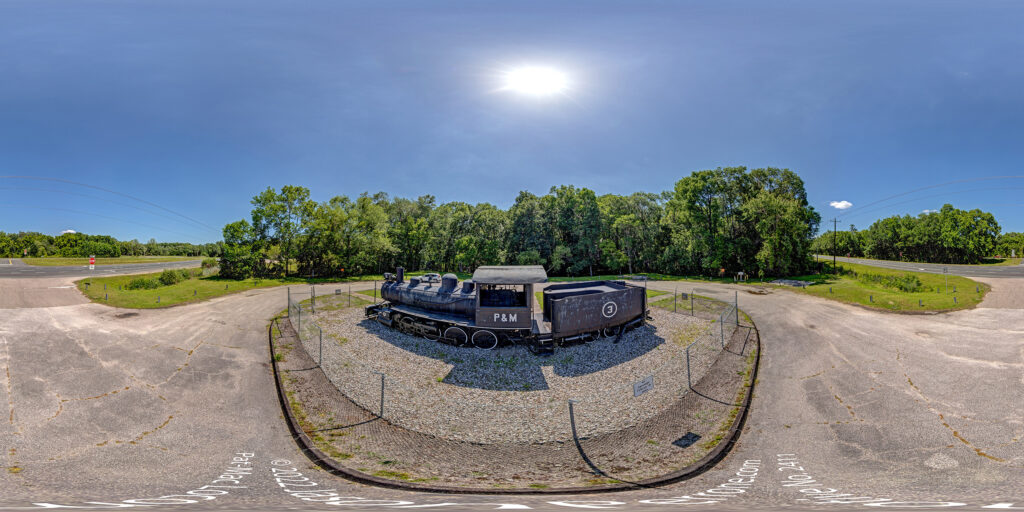